In conjunction with our National Engineers Week program, it is our goal this year to recognize an exemplary engineer(s), and an outstanding project or projects from the Western Pennsylvania region.

(Past practice has been to award deserving projects in more than one category.)  To that end, a Selection Committee has been established within the ESWP Board of Directors and will make selections based upon the criteria as listed below. The attention that these awards will bring will highlight the important contributions engineers, contractors, and educators make to our society. It is the hope that these awards will represent a meaningful impetus in attracting the best minds to the ﬁeld and encouraging those in the ﬁeld to excel at their work. 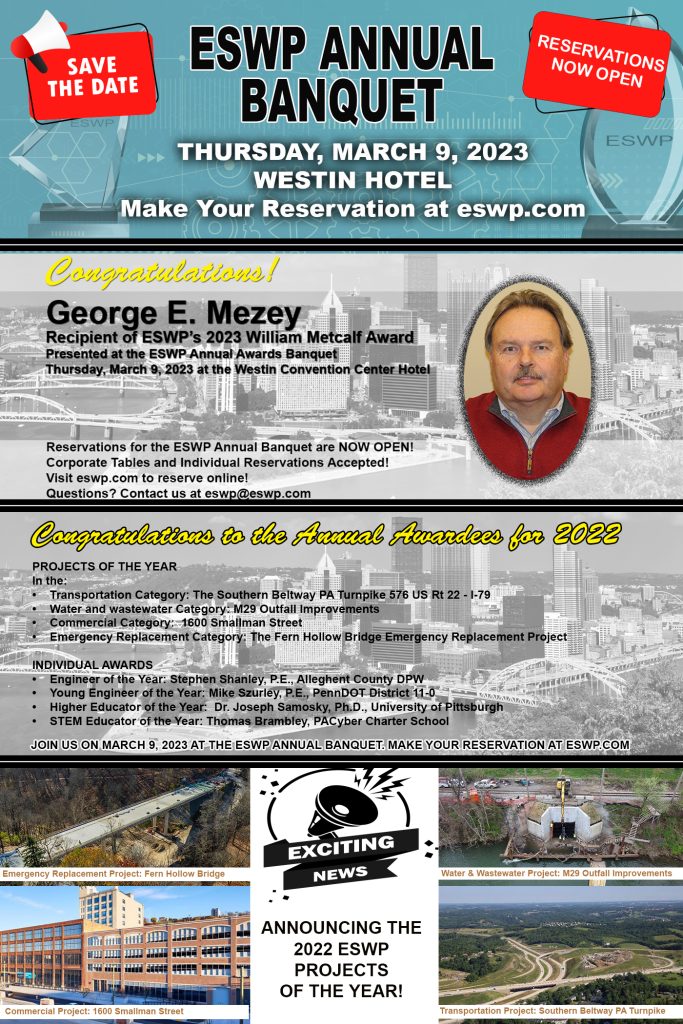 Click here to to reserve your spot at our Annual Banquet, set for March 9, 2023!

Origin of the Metcalf Award

The Board of Direction of the Society at a meeting held on October 31, 1962 formally approved the following resolution concerning the William Metcalf Award.

It is proposed that the Engineers’ Society of Western Pennsylvania make an annual award to a very outstanding engineer who is a resident of the United States and whose field of engineering accomplishment relates to those fields normally associated with Western Pennsylvania, such as steel, aluminum, power, coal, electrical equipment, chemical, glass, construction, etc.

It is proposed that this award be named the William Metcalf Award in honor of a great engineer and the first President of our Society.

A Stainless Steel plaque, approximately 12 X 14 inches, bearing a likeness of the head of William Metcalf will be properly engraved and presented to the recipient at the Annual Banquet of the Society.

A committee, consisting of seven members of the Society, is to be appointed by the President and to include the President, Chairman of the Entertainment Committee, and five members who are ranking engineering executives of major Pittsburgh industrial engineering enterprises, at least five of whom shall be or have been members of the Board of Direction. The purpose of this committee shall be to select the candidate for the Award each year.

William Metcalf was born in Pittsburgh on September 3, 1838. Both his father, Orlando Metcalf, and his mother, whose maiden name was Constance D. Fries, were descendants of the very early settlers of this country.

After graduating from Pittsburgh public schools and Rensselaer Polytechnic Institute in Troy, New York (1858), he returned to Pittsburgh to become an engineer and draftsman at the Fort Pitt Foundry. In one year he became the general superintendent and held this position throughout the Civil War, although he was not yet thirty. It was his guiding genius which made the Fort Pitt Foundry one of the great manufacturing centers for heavy guns and projectiles for the armies of the North in the Civil War. Fort Pitt Foundry was one of the leading makers of armor plate and heavy ordnance for the Union. It was armor plate from this Foundry which was used on the ironclad steamers built at Philadelphia. The Foundry furnished the government with 1,193 cannon, 15 percent of the total supplied during the war. In 1868, Mr. Metcalf went into the steel business, in which he continued for many years, not giving up active management until about 1895.

Manufacture of crucible steel was largely pioneered in the United States by William Metcalf. He was one of the organizers of the Crescent Steel Company in 1889, specializing in fine crucible steels, and developing many of the processes for improvement.

William Metcalf was one of the leading practical experts in the field of mechanical and heat treatment of steel during the period prior to 1900. He was author of numerous scientific papers and leader in engineering circles. His book, “Steel, A Manual for Steel Users,” published in 1896 awas widely used.

ESWP’s Engineer of the Year Award was created in 1998 to recognize individuals who have significant technical and professional accomplishments which contribute to the engineering profession. These individuals are active in civic and community affairs, hold membership in ESWP, or an affiliated technical society or member company, and possess a Bachelor’s degree or advanced degree from Engineering School or 5 years work experience in a recognized engineering position. No members of the Engineer’s Week Committee are eligible for this award.

The ESWP President’s Engineering Excellence Award was created in 2010 to recognize individuals or organizations that have made significant contributions to advance the practice of engineering, or the engineering profession, while they, themselves might not be an engineer. Nominations are brought by the ESWP Board of Directors and the recipient is chosen by a vote of the Board. This award is presented at the discretion of the Board, and may not be awarded on an annual basis.

ESWP Educator of the Year Recipient