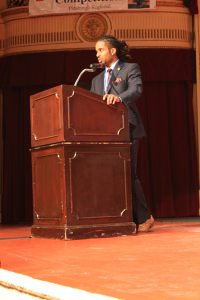 Congratulations to Stephen Canton, who was  named the Future City 2018 Alumnus of the Year by the international Future City Competition. Canton participated in the Pittsburgh Regional Future City Competition in 2004 and 2005, when he was a student at St. Benedict the Moor School in Pittsburgh. Now a University of Pittsburgh medical student, Canton said “In my current roles as a researcher, bioengineer and physician to be, I utilize skills that I learned while participating in Future City.”  Canton has a bachelor’s degree in bioengineering from the University of Pittsburgh and a master’s degree in kinesiology from Louisiana State University. He expects to complete his medical degree with a concentration in bioengineering, biotechnology, and innovation from Pitt’s School of Medicine in 2020.

This site uses Akismet to reduce spam. Learn how your comment data is processed.