Congratulations to Arletta Scott Williams as the recipient of ESWP‘s 2022 William Metcalfe Award!

The Award is scheduled to be presented at the Annual Engineering Awards Banquet on Thursday, February 10, at the Westin Convention Center Hotel. Please visit the ESWP Banquet page to make your reservation for the event!

Instructions to access the e-ballot were emailed to all Regular Members on Dec. 20.

If you haven’t received your ballot, please contact us.

Thank you to everyone for your donations to the ESWP Employee Holiday Gift Fund! On behalf of all the members of the ESWP staff, WE THANK YOU! 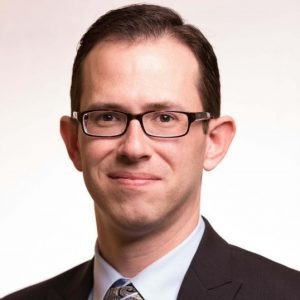 Dan will play a key role in driving the growth of the seven Pittsburgh Practice areas: Architecture, Bridges, Civil & Environmental Engineering, Construction Services, Land Development & Infrastructure, Planning, and Transportation. In addition to continuing to foster relationships with Michael Baker’s current valued clients and implementing strategies to accelerate business growth across the Region, Dan will also serve as a liaison with the many firms that Michael Baker does business with in the service of our clients.

Dan has honed his business development skills by working with A/E/C clients and legislative leaders throughout Western Pennsylvania over the past 20 years.

On his new role at Michael Baker, he said: “I believe collaboration, a strategic path forward, and clear communication are key to corporate goals, organizing growth and the alignment of community and industry partnerships. I’m excited to help enhance Michael Baker International’s presence and value in Western Pennsylvania.”

Most recently Dan served as the Director of Business Development for Hill International, overseeing business growth and opportunities in the Western Pennsylvania market.

The weather, golf course, and services provided were all spectacular! Thanks to all those who came out to support the outing including all of our sponsors listed below.

Pennoni is excited to announce the promotion of Jennifer Laning, PE to Principal Bridge Inspection Leader! Laning is currently an Associate Vice President in the Transportation Division with a primary focus in bridge inspections and project management. She also serves Pennoni as a Bridge Inspection Practice Leader, headquartered in the Baltimore, MD office.

This recognition is to acknowledge all her accomplishments in the transportation space and applaud her for growing the Maryland, Virginia, and Delaware markets as well as her work as a mentor to other bridge engineers.

Before coming to Pennoni, Laning was a part of the U.S. Army Corps of Engineers in bridge program management, rehabilitation and repair of bridges, coordination of projects with multiple agencies, leading multidisciplinary design teams, and bridge inspection. 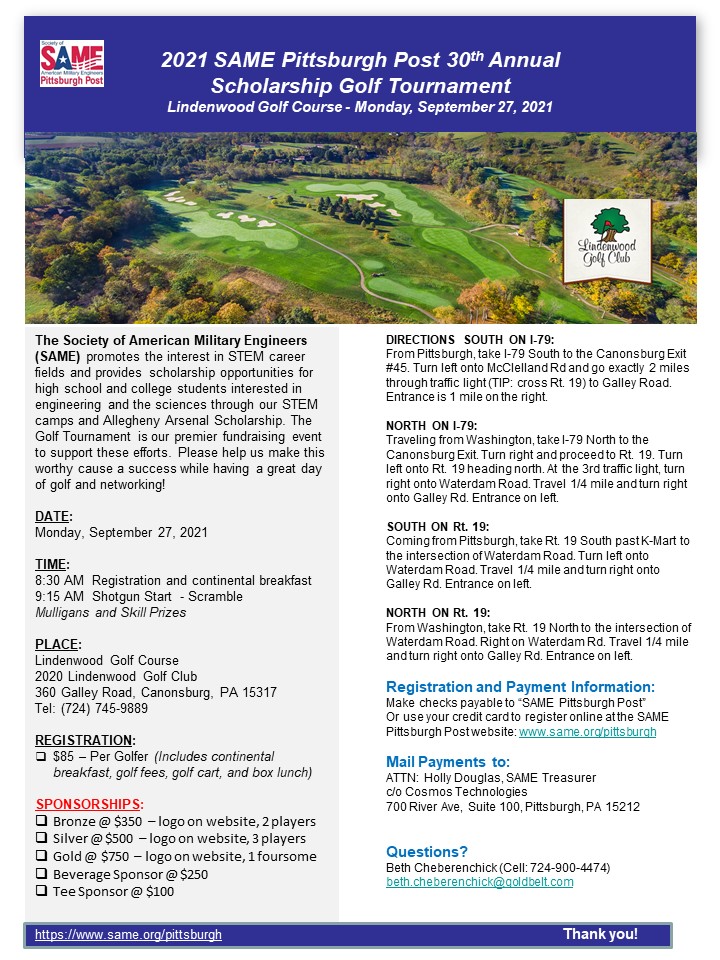 The SAME Pittsburgh Post created the Allegheny Arsenal Memorial Scholarship last year when SAME and the Pittsburgh Post both reached the 100-Year milestone. With a vision for the next 100 years, the Post expanded its Science, Technology, Engineering and Math (STEM) support long provided to primary and secondary education students, to include college students pursuing a STEM related degree.

The Pittsburgh Post has always recognized the importance of strategic collaboration between civilians and the military, both for national defense and homeland security. Therefore, in establishing the Post’s college scholarship fund, the Post wanted to honor those civilians who perished in Lawrenceville at the Allegheny Arsenal while preparing ammunition for the Union troops. On September 17, 1862, a series of explosions at the Allegheny Arsenal killed seventy-eight people, mostly girls (some believed to be as young as 14), rolling cartridges for Union soldiers. With men off fighting the Civil War and concerns of horseplay among boys in a dangerous work environment, girls and young women were relied upon to roll ammunition for the troops in a true civilian-military partnership. In recognition of the tragic loss of these young arsenal employees, the SAME Pittsburgh Post, as part of its centennial observance, established the Allegheny Arsenal Memorial Scholarship Fund.

The Post is offering a scholarship to assist college students who are pursuing careers in STEM fields including: engineering, architecture, mathematics, technology, computer, or related science (chemistry, biology, physics, environmental) degree programs. A $1,500 scholarship will be awarded each year (subject to future Board revisions), based on applications received for the academic year. Students enrolled full-time as a freshman, sophomore, junior or senior in college for academic year 2021-2022 can apply. Anyone receiving the Allegheny Arsenal Memorial Scholarship may reapply in subsequent years but will be considered among the full pool of applications received for that academic year.

Full details and the application form are available on the Post’s website at www.SAME.org/Pittsburgh.

Applications will be received from August 18, 2021 through midnight, September 7, 2021 via email at: pittsburghpost@gmail.com

The Civil PE exam review course, beginning on August 12, helps exam applicants prepare for the Civil PE exam. The topics are taught by professional engineers who have both industry and teaching experience. The review course consists of 30 hours of lectures covering the common topics of both the breadth and depth Civil PE exam. The topics include: structures, construction management, geotechnical, highway design and traffic analysis, environmental, and water resources

The EIT Review Course, beginning on August 12 is for all disciplines, and helps engineers prepare for the Fundamentals of Engineering Exam. The review course consists of 30 hours of lectures covering common exam topics.

In addition, the Chapter also offers a Civil PE Mini-Refresher course, beginning on July 22. To be better prepared for the Civil PE Review Course, the Pittsburgh Chapter offers a three (3) session Mini Prep Review Course which includes six (6) subjects prior to taking the PE Review.  This mini course is primarily for engineers who have already passed the EIT Exam, but feel a need to brush up on some subjects that are of importance for the Civil PE Review Course or for those who plan on taking the Mechanical PE Exam. This mini course is being offered because we have found that many engineers have not used certain basic skills for some period of time and need a brief review to allow them to take full advantage of the material presented in the Civil PE Exam Review Course.  Our goal is to give all students the best opportunity to be successful on the PE Exam. These sessions will review selected topics in mathematics, statics, strength of materials, physics, electrochemistry and engineering ethics.

Please contact the Chapter office or our education director, Steven Musial, P.E. if you have any questions. Cell: 412-956-6448

To REGISTER or to learn more about costs, location, and format of these courses, visit: https://pittsburghpe.org/events/review-courses/

We are now accepting applications for the 2021 ESWP Members Scholarship.

The Scholarship is open to the spouse, children, or grandchildren (natural, step, adopted, or ward) of a member in good standing (one or more previous, continuous years) of the ESWP – please note that only the individuals listed on a corporate member firm roster are eligible).

The scholarships will be awarded to outstanding high school seniors or currently enrolled college undergraduate students, preparing for a career in engineering, architecture or applied sciences. The students must be accepted in an eligible, full-time course of study, at an accredited college or university. The awards will be made without regard to financial need.

Completed application forms are to be submitted to the ESWP Scholarship Committee, postmarked no later than July 31, 2021. Please email eswp@eswp.com to receive an application.